The Japanese philosophy of Kaizen is a guiding force for Tom Baldwin ’78, ’84MBA, CEO and president of Benihana Inc. “Kaizen emphasizes continuous incremental improvement,” explained Tom, “and that’s what we do at Benihana. We strive to improve every single day.” 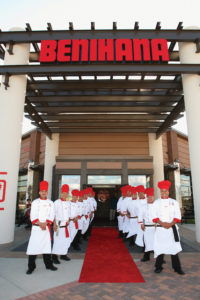 But before even knowing about the concept of Kaizen, Tom was applying a version of the philosophy to his life. Growing up in the Bronx, he was the first in his family to go to college, graduating from Iona in 1978. He went on to earn his MBA in Finance in 1984 and his CPA license.

Tom started his career as an auditor for Kraft (General) Foods, where he gained valuable experience. When he was asked to operate a small restaurant subsidiary, he packed up and moved to Denver, Colo. By age 27, he was made CFO. Not long after, he was recruited to lead Morton’s Restaurant Group which, at the time, was a small, Midwestern-based company with only nine restaurants. During his 20-year tenure at Morton’s, he led the company through two IPOs and is known throughout the restaurant industry for his role in building Morton’s The Steakhouse into a global iconic brand.

Recognized for his leadership abilities, Benihana Inc., the nation’s leading operator of Japanese Teppanyaki and Sushi restaurants, named Tom their CEO and president in 2016. The company employs 8,000 people and serves 14 million guests annually. “I love the interaction with our guests and employees,” Tom said. “I’m blessed to work with very smart, dedicated people. Our executive chef has been with Benihana for 40 years. We all work together to “Create Great Guest Memories.”

With his commitment to Kaizen, Tom advises young entrepreneurs to “work hard and learn as much as you can from smart people.” And he improves on the philosophy by adding: “Then go pass it on.”

You can’t have too many friends.